The landscape of nature is like the human figure – it is a subject with endless possibilities for expression. Photographs of the environment can be appreciated simply for their depiction of beauty; they can reveal truths about our relationship to nature and our understanding of wilderness; they can teach us the basic elements of design. Landscape photography can reveal as much about the photographer as it does about the meaning of the landscape, because their photographic treatment reveals their artistic vision.

Fernando Puche (http://www.fernandopuche.net/) is a Spanish photographer with many years of experience and significant public recognition for his work. He has published several books, including, Photography and nature: Beyond the light (2003), The Inner Landscape (2005), An Imaginary Journey (2007), Chronicles of a skeptical photographer (2009),How photographer Fernando Puche works (2009) and Diary of an amateur photographer (2012).

The work I’ve selected to look at for this essay translates as “Multiplied Forest #6” and is from a series of the same name where the photographer layers natural elements over each other to create an near-abstract image using multiple-exposure. He says of his this series:

This portfolio is an attempt to go beyond all those images which show the natural world as something beautiful and spectacular. A way to go beyond that “taste” of reality that exude my former images. The multiple exposures technique let me to create images standing between reality and fiction, so the resulting work is more abstract and much less “documentary”. (Puche, 2013c)

Many of the images take on a symmetrical composition, as it appears that he rotates the film (or sensor) holder in the 4 x 5 camera as each exposure is made. It seems clear that these works are still about what is “beautiful and spectacular” just as much as the photographer’s previous work, which consisted of images of nature a la Eliot Porter (an early pioneer of color landscape photography) – very tightly composed and subtly colored –  that depict sublime nature.

To depart briefly from the main topic to discuss what it means to make photographs of the sublime in nature, we can simply consider what other approaches there are. Other photographers make images that are about other aspects of nature beside the sublime: how we view nature, how we treat it, how we try to replicate it.

It is the case that these new images are no longer about the sublime, because the photographer is paying less attention to the appearance of the elements in their natural state and instead using their form to create other textures, colors and shapes. In other words, a photographer interested in depicting a romantic view of nature will compose the image to only include those elements consistent with grandeur and rationale order, often excluding details to create the illusion of nature untouched by humans. Puche’s images are still very much about beauty, but in a different way:  they are carefully chosen elements that are delicately layered over each other to build intricate patterns and nuanced color.

Puche’s stated purpose is to use natural elements to create fictions of nature, but these images are as much fictions as the photographs in his portfolio which do not involve any obvious manipulation. In this older images, which Puche refers to as “documentary” he was also creating a fiction of nature, it was just a different story. For example, in the image below,  Puche has created a fiction about water flowing down a cascading waterfall. It is an aesthetically pleasing image using the technique of long exposure to give the water a misty smooth experience, which contrasts with the sharp edges of the shale and the texture of the leaves.

Water does not look like this in nature to the human eye – the image is a fiction about nature. This view of running water exists only because the photographer used a long exposure. It is as realistic a view of nature as water frozen in motion at a very high shutter speed – our eyes cannot perceive either end of the spectrum of motion. A photographer chooses this technique for a variety of reasons: it looks magical, soft and smooth; it creates an unexpected and pleasing texture; it cleans up any imperfections in the water; and it creates a spatial layer in the image. The story it tells is of the place; it is a story of the sound of the water as it rolls over the shale, the transparency of the water as it bends over the edge of the stone and the idea of an unending flow of water passing down the mountain into the valley.

When we talk about creating a fiction of nature, it is not to be critical, rather, is is simply important to acknowledge that the act of making a photograph is a complete fiction – the photographer starts changing reality the minute they frame the image, choose an exposure, select a shutter and aperture combination, among many other choices.

Are Puche’s new images between reality and fiction? This is not really their main topic. In other words, the technique the photographer uses extracts shapes and textures from the reality of nature and combines them in a manner not visible in nature, but this is exactly the same as use of long exposure.

My interpretation of these photographs is that they are still very much about place, but the photographer is acting more vigorously to tell that story. As we look at the image of the tree tops layered over each other in “Multipled Forests # 6”, it conveys the feeling of expansiveness, layered space, and even the dizziness resulting from  tilting your head back and looking at the tops of the trees. The layering of pattern that Puche builds his images with amplify the design of nature and convey the quality of the space and place.

Cole Thompson (http://colethompsonphotography.com/Portfolios.htm) is a versatile photographer with interests that span from documentary photography, portraiture, and landscape, but for the purpose of this essay we will focus on the Harbinger series. Many of his landscapes images are not about the landscape at all, rather, they are analogies of emotional or spiritual states. This is actually quite different than Patel and Puche, who both keep their work referenced to the subject itself. Thompson introduces us to his series using the definition of harbinger:

1. one that goes ahead and makes known the approach of another; herald.

Although this textual context is important to help the viewer have a point of departure to interpret the images, he does an effective job of getting this across in the image itself. Lets look at how he goes about this.

Thompson’s compositions have a minimalist style in this series – they only include the essential elements to make the visual statement. He uses framing and exposure to do so. Many of the images are low key, in other words the middle tones are darkened considerably, the shadows are exposed to be solid black, and the highlights shown are only those at the high end of the spectrum. It is likely that he uses filters or digital color conversion to achieve this effect.  The result is an image in which the sky is surrealistically dark, the landscape is reduced to limited detail and basic forms, while the light tones of the cloud are dramatically emphasized. The cloud as “harbinger” appears either as a menacing element or as an omen of good on the horizon, although centering the cloud in the frame leads to a more optimistic possibility. Cole Thompson’s photographs build expectation; the image is frozen, but a mysterious event is implied. His images are a visual representation of a foreshadowing.

The idea that photographs of elements in nature could refer to other possibilities was popularized by Alfred Stieglitz with his “Equivalents” series in 1926, so Thompson is building on an a tradition in photography as valid and as significant as landscape photography that is  completely self-referential 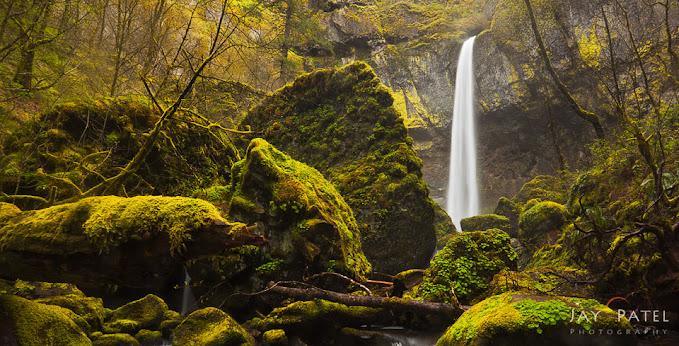 Jay Patel (http://www.jaypatelphotography.com/)  is a meticulous landscape photographer who uses the latest developments in HDR techniques to present highly detailed, richly colored, and carefully crafted compositions of nature. His website describes the purpose of his work:

His photographs try to capture both the physical and emotional nature of light. “Light in nature takes on astonishingly diverse shapes, forms and colors that allow us to interact with the world around us…. He is well aware, however, that his photographs can convey only so much of the wonder as it is beyond his abilities to replicate the awe and magnificence of the natural world. (Patel, 2012b)

Jay Patel uses the highly controlled digital exposure and layering techniques he has developed to fill his shadows, midtones, and highlights with even more tonal detail than our eyes can perceive. His application of technique is directly related to his objective of exploring the way light describes elements of the landscape.

Although Patel describes his purpose as “replicating the awe and magnificence of the natural world” (it would be hard to describe the sublime in nature any more clearly),  I see Jay Patel’s work as being about abstraction even more than the work of Puche. Jay Patel’s work is unabashedly about the way he sees nature – about the beauty that he sees… and he has developed the visual and technical skills to really communicate this very effectively. The reason he can make such compelling images of nature is because he is able to abstract the essential design elements of the scene. He communicates his vision and feeling for the place by deconstructing the space into essential forms and carefully arranging his composition to build an image that communicates his vision.

For example, in “Elowah Falls”, Patel uses the same long exposure technique as Puche in White National Mountain Forest” to transform the waterfall into a misty stream of flowing white energy that creates a dominant vertical presence in the frame positioned right at the 2/3rds mark of a horizontal grid of the frame. The very diffuse light that describes the rest of the valley, which is dominated by large massive shapes in the form of moss covered boulders, creates soft undulations of green hues. The large shapes of the stones are broken up by the diagonals of fallen tree limbs which add more visual movement to the frame without disrupting the dominance of the waterfall. In order for Patel to compose this frame, he must look at it abstractly – he must move conceptually past the  moment and the physical three-dimensional reality and see it as form being shaped by light.

You can read more about this particular image and how he actually cropped it from his original exposure here. His crop removed an appearance of the mountain stream from the bottom of the frame, which improved the composition by providing a  stronger visual foundation to the image and gave the waterfall much more preeminence in the image.

So how do we compare the three photographers? Jay Patel and Fernando Puche’s work depart from a similar premise – to share their vision of place – they speak to use about their subject, telling us stories of the design of nature and light. Cole Thompson uses the landscape to express a concept that is not related to the landscape at all, but rather is related to the human condition and our expectations in life. All three photographers create work that merits reflection and consideration.